Increasing numbers of installers and integrators are recognizing the benefits of HDBaseT technology in commercial AV Meets IT settings that require KVM extenders, especially in terms of distance and USB extension, so we take a look at what makes the technology the right choice for extending KVM signals. 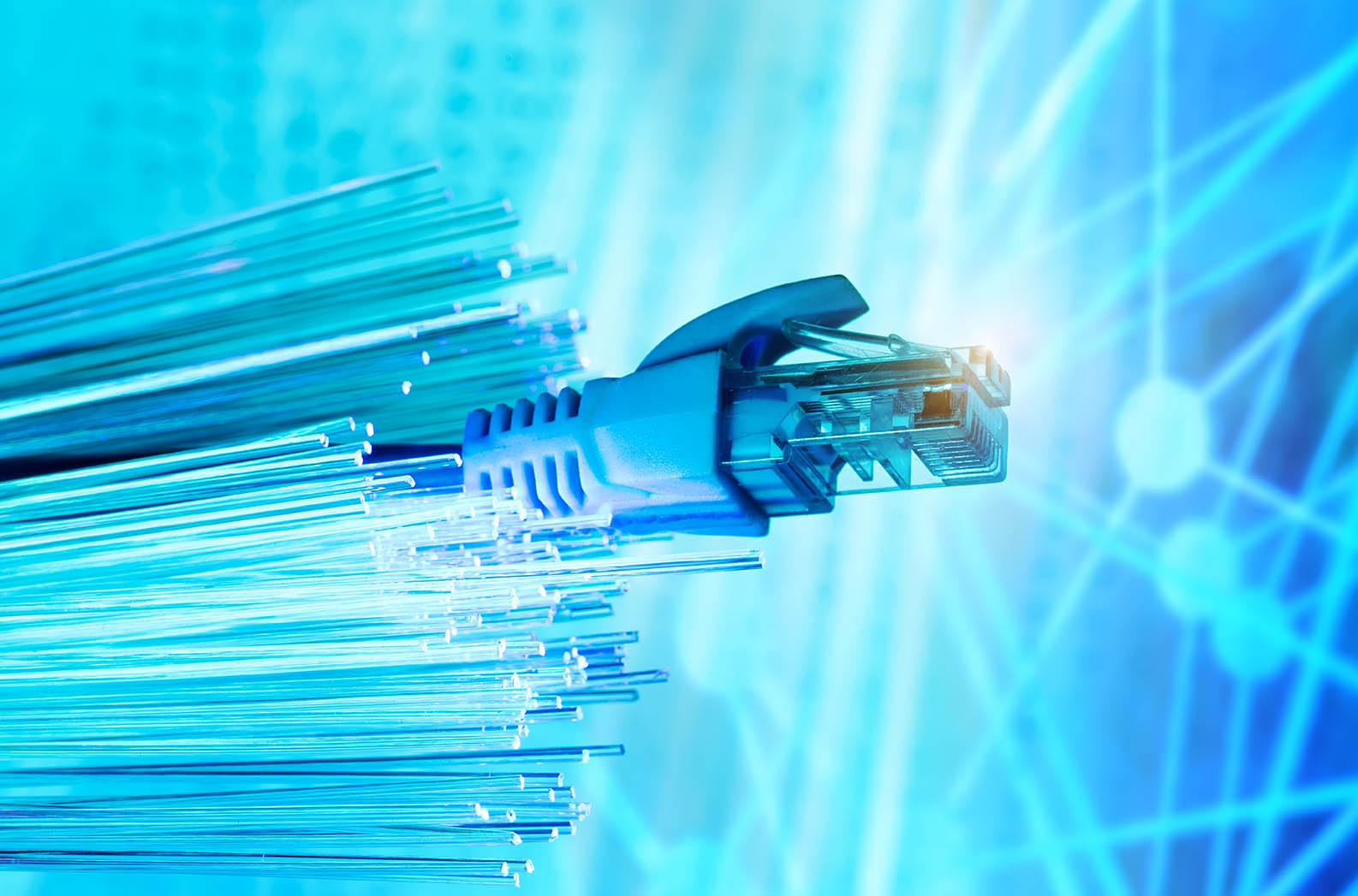 First introduced in 2010, HDBaseT™ has fast become the global go-to connectivity standard for the AV Meets IT market by implementing a 5Play™ cornerstone to provide a simple and cost-effective solution for transmitting 4Kultra-high-definition (UHD) signals, along with audio, power, home networking, Ethernet, USB, and control signals, overa single Cat 6/6a or fiber cable. These features made it a great choice for KVM extender applications. Then, with therelease of HDBaseT 2.0 in 2013, the format became even more accessible to consumers by enabling a multimedia homeconnectivity solution while also re-affirming HDBaseT’s commitment to professionals, with significant benefits forvarious commercial applications in the AV Meets IT realm. With HDBaseT, USB compatibility and long distances are the keyfactors that make the standard so beneficial when it comes to applications that involve KVM extenders.There are a variety of related advantages to HDBaseT 5Play technology that makes it especially useful for KVM extenderapplications. These include:

The Key Improvements of HDBaseT 2.0 for AV Meets IT Applications

By specifying the HDBaseT network protocol and defining the required adaptations across all OSI layers, the HDBaseT 2.0 specification both increased interoperability and also allowed for the provision of optimized services for high-throughput AV Meets IT applications. These new enhancements to the technology included expanding it as a multipoint-to-multipoint technology and adding multistream support, as well as adding support for daisy-chain installations in multi-display environments. Spec. 2.0 also added fiber as a new transmission medium. Perhaps the most significant benefit to AV Meets IT applications with the release of HDBaseT 2.0 were the embedding of native USB 2.0 support via a high-speed USB channel with an active bitrate of 127Mbps, which meets demand for long distance touch-screen and keyboard-video-mouse (KVM) functionality, as well as storage devices and cameras. The new specification also incorporated further features that improved performance for the no-latency transmission of ultra-high-definition audio and video (@4K).

To understand why ATEN considers HDBaseT 2.0 to be so ideal for our KVM extenders in a wide variety of applications,it’s useful to take a look at the purpose of KVM Extenders. The main purpose of a KVM extender is to provide convenient,remote, high-speed access to a computer system located elsewhere, as well as the ability to control multiple remotecomputers if used in tandem with a KVM switch, with a single set of peripherals, over Cat 6/6a cables. In this way, inaddition to playing an important role in overcoming the bandwidth limitations of traditional interface-based cables(such as HDMI, for example), KVM extenders help to overcome the distance limitations of the protocols themselves (such as USB). Furthermore, KVM extenders can help to improve workspace ergonomics by locating PCs elsewhere so as to avoidheat and distracting fan or hard drive noise, and by allowing computers to be kept at secure locations or away fromharsh environments, such as factories and industrial areas. ATEN’s HDBaseT 2.0 support means that in addition to thesetraditional uses for KVM extenders, there are many more uses possible in a wide variety of AV Meets IT applications.With RS232, IR, Ethernet, and USB 2.0 enabled, HDBaseT allows pro AV vendors to send proprietary controls to be usedwhen their equipment is on both ends.Further benefits of HDBaseT 2.0 include:

A longtime member of the HDBaseT Alliance, ATEN has over 30 qualified HDBaseT trainers and over 20 Pro AV solutions certified by HDBaseT, including video matrix switches and high-definition video/KVM extenders and splitters. In addition to Contributor member privileges such as a dedicated company page in the HDBaseT Alliance’s Installer Zone, ATEN has also been invited to share the benefits of 40 years of IT management and KVM control experience to define specifications for products that further accelerate the integration of AV and IT technologies, in turn helping both customers and solution partners to stay ahead of the curve.
What all of this means is that ATEN solutions feature the following advantages:

The following are two real-life cases in which ATEN solutions, boosted by HDBaseT 2.0, went beyond the traditional KVM extender functions to deliver excellent results.

A hospital implemented a new, cutting-edge MRI-guided radiation therapy as part of their ongoing development of leading treatments for cancer and brain disorders. They required a reliable MRI extension solution with high-precision video quality and accuracy that would meet the high demands of such critical medical and healthcare applications.
By adopting ATEN’s CE920 USB DisplayPort HDBaseT 2.0 KVM Extender, MRI equipment is able to be accessed and operated with 100% zero latency transmission while uncompressed video with pixel-to-pixel quality over 100 meters is reliably delivered to the operator’s room for real-time diagnosis. And the single cable to install is easy. 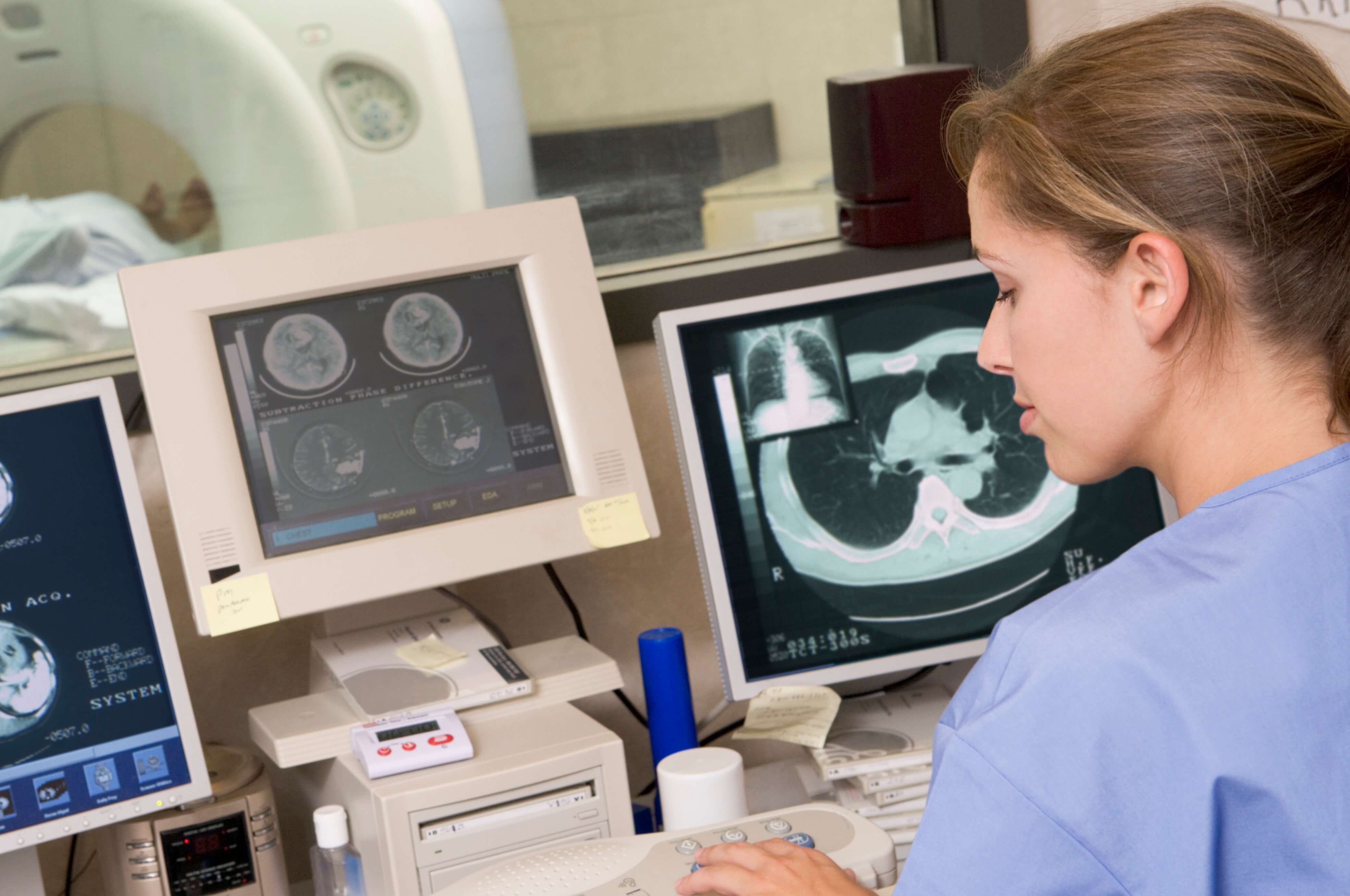 A multinational restaurant chain wanted to enhance its overall service and customer satisfaction by increasing related operational efficiency, reducing customer wait time, and improving the overall in-store experience. This involved the installation of self-service kiosks that automate the order and payment process, and the integration of a digital signage solution to offer interactive advertisements and order notifications.
ATEN’s USB HDMI HDBaseT 2.0 KVM Extenders, supporting touch and payment interfaces, allow flexible placement of self-service kiosks on the shop floor while extending to computers located in a secure room. Integration with a digital signage system enabled distribution of interactive content spread across multiple locations throughout the store. Plus, ATEN’s exclusive LockPro design makes the system more secure and stable by securely anchoring the HDMI connection to avoid accidental detaching. 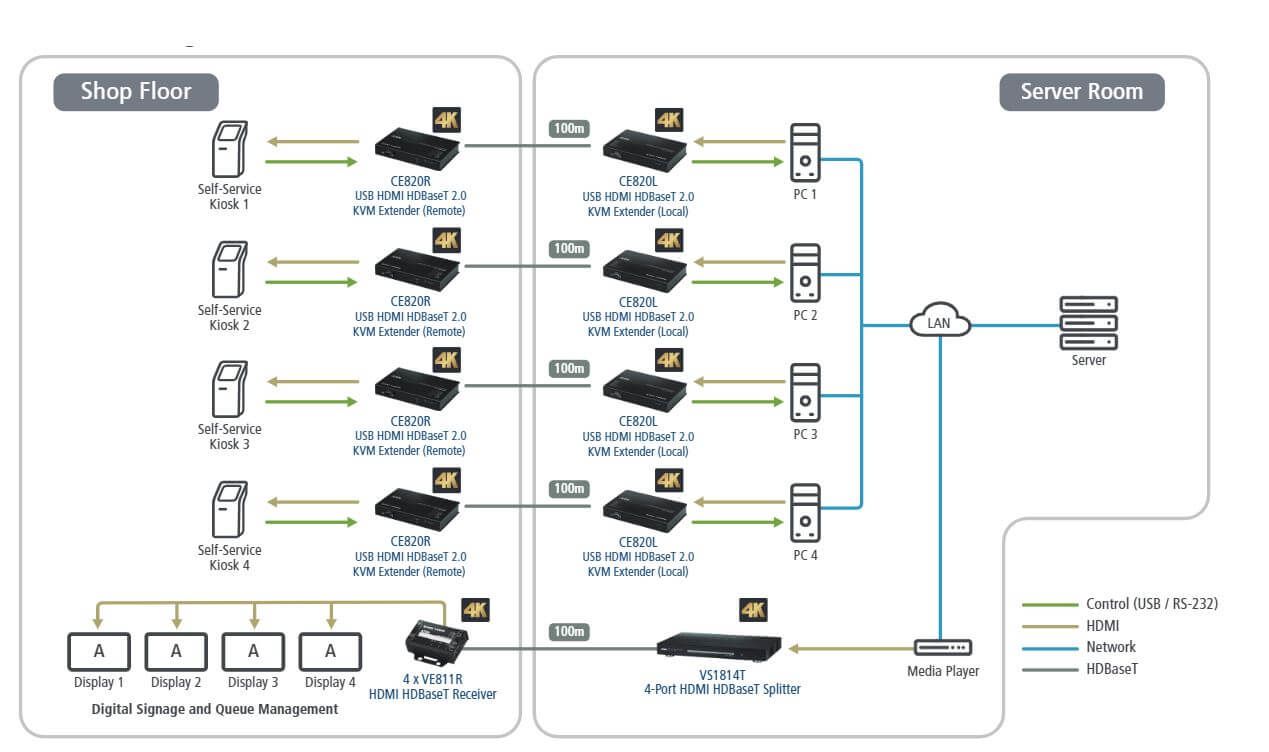 So whether you need convenient remote access to a computer system located far away from your console, or to send automation commands to a display or device located remotely, or even have a need for 4K video, stereo audio, USB KVM functionality and diagnostic data to be sent between a computer and an automated QSR display in an interactive digital signage installation, ATEN has an HDBaseT 2.0 solution for you.