The most popular format is HDR10, which is an open standard created by the Consumer Technology Association (CTA) in 2015. It is the de facto standard, since it’s free to use, is available everywhere, and all HDR TV’s can decode it. HDR10 has been adopted by most streaming services and is the baseline HDR technology for 4K Ultra HD Blu-ray. Plus, Dell, LG, Samsung, Sharp, Sony, and Vizio all manufacture TVs/monitors with HDR10. But while it is the furthest ahead in terms of available content and consumer products, the main issue with the format is that it only supports static HDR. Neither is it SDR TV backwards compatible, which limits its practical appeal to broadcasters.

Dolby has its own version of HDR, called Dolby Vision, and this steps up from HDR10 by offering dynamic HDR. It is supported by streaming services such as Netflix and iTunes. This format has been gaining popularity since Dolby Vision TVs were first released in 2017. This is a proprietary technology, but while companies have to pay Dolby to use it, Dolby, in turn, provides resources and tools to adopters, so that Dolby Vision content is optimized on their brand of TV. In terms of content, there is support from Sony, Universal, Paramount, and Time Warner, among others.

Another HDR format is Hybrid Log Gamma (HLG). This was created by Britain's BBC and Japan's NHK. While this format’s picture quality is not considered to be quite as good as some of the other HDR formats, the one advantage is that it is the only major format that is backwards-compatible with SDR TVs. This is because instead of using metadata, HLG uses the same gamma curve as an SDR signal, but then adds a logarithmic curve with extra brightness over the top of the signal. The fact that it does not use metadata means that it is possible to produce HLG HDR using the same workflow as for conventional TV, making it much more suitable for broadcasting. In terms of the battle for dominance, it is clear that having one format that works on both older TVs and newer TVs is going to be a benefit for broadcasters because the majority of home users will still continue to view content on non-HDR TVs for many years. The format is supported by BBC iPlayer, DirecTV, Freeview Play, and YouTube. 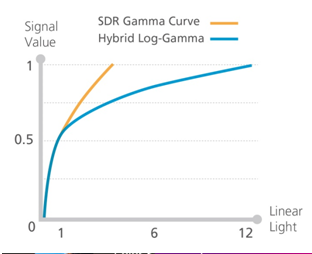 In addition to these three formats, another newer one is HDR10+. This was announced by Samsung and Amazon in 2017 and is an open standard. The main advantage of HDR10+ is it features dynamic metadata, which means there is no compromise when viewing the darkest or the brightest scenes. In addition, HDR10+ is backwards-compatible with devices that use HDR10 encoders. While this Samsung format is ostensibly royalty-free, some industry insiders have expressed concerns, but despite this, support seems to grow. Samsung, Panasonic, and 20th Century Fox are part of an HDR10+ Alliance, while HDR10+ content is offered by Amazon Video. Warner Bros and Panasonic Ultra HD Blu-ray players also support the HDR10+ standard.

Finally, SL-HDR1 is another HDR standard that was jointly developed as a proprietary technology by STMicroelectronics, Philips International B.V., and Technicolor R&D France. Its main advantage is that it uses both static and dynamic metadata and is fully backwards-compatible with SDR TVs and networks, giving it an edge with broadcasters. This means that a reconstructed HDR signal from an SDR video stream can be delivered using existing distribution networks and services.

While the industry is excited about HDR content and HDR displays, how do you make sure that your HDR content gets to your HDR display?  What kind of infrastructure do you need to achieve this? This is where ATEN comes in. 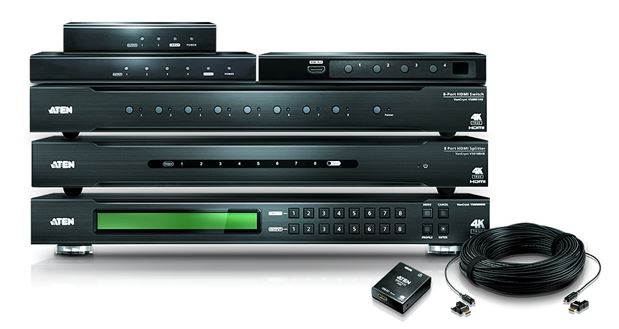 ATEN’s True 4K Series with HDR supports all the popular HDR formats on the market, including HDR10, Dolby Vision, and Hybrid Log Gamma (HLG), and both static and dynamic HDR. ATEN’s products support up to 18Gbps bandwidth and HDCP2.2 to deliver high-performance signal extension, routing and distribution solutions for True 4K HDR video content. The series not only includes splitters and switches but also matrix switches with a video wall processor, meaning that ATEN has a product for any of the various applications where you need the seamless delivery of HDR content at the best possible quality to wherever you require it.