How to Pick Collaboration Hardware for Any Meeting Room Size 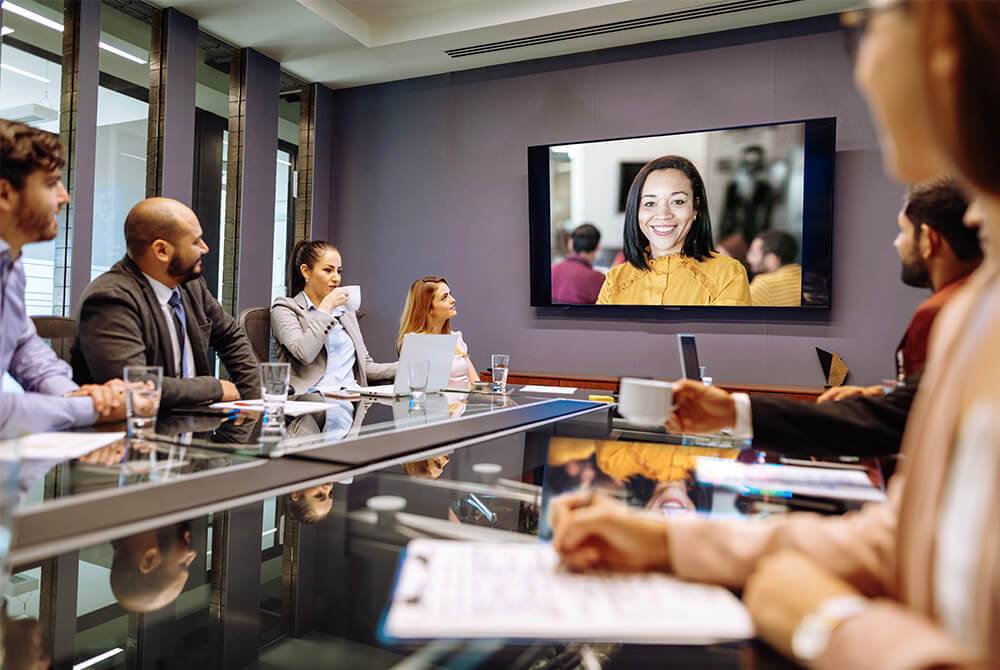 Hybrid meetings are the norm and will likely stay that way so it's time to get meeting rooms, big and small, ready for the future of work.

Interconnectivity is the name of the game when it comes to meeting rooms. The need for multiple connections to a laptop is necessary when it comes to having USB 3.0 peripherals, such as a camera, a mic, and speakers. A hub, a switch, and an extender are a necessity for this type of connectivity. Even small meeting rooms now need accessories and speakers to be used with Zoom or Microsoft Teams for remote/WFH participants.

A device such as the ATEN US3344I Industrial Hub Switch is both a hub and a switch that lets up to four computers share four USB 3.2 Gen 1 devices. For example, it can stay connected to a meeting room PC that is concealed and always ready, leaving three ports for laptops. The US3344I works with conferencing systems as well as touchscreens or presentation screens being used in a meeting room. Plus, it has an external remote control port that simplifies cable layout.

The ATEN US334I is a 4-port USB 3.2 Gen 1 Industrial Switch that enables four computers to share and use USB 3.2 Gen 1 devices such as keyboard, mouse and other peripheral devices.

To complement a hub switch such as the US3344I, the UE3315A USB 3.2 Gen 1 Extender Cable, is a USB extender that can easily be implemented in this scenario. Plus, it measures 15 meters long, more than enough for most meeting rooms. This allows you to place equipment at a distance and out of sight. This cable can extend a USB hub, conferencing system, or even provide touchscreen or presentation screen extension.

A KVM switch might not be the first thing that springs to mind when it comes to meeting room integration, but that’s what makes this device so powerful. (Are you unsure what a KVM is? Check out our feature article that explains it.)

A KVM switch such as the CS1824 uses HDMI, USB 3.0, and RS-232 to connect to various inputs and interfaces, such as a monitor for remote participants calling in on a video call, speakers, meeting room collaboration, audio devices, and even a laptop.

We’ve seen from the market that the CS1822-24-42-44 models have often been requested for their USB 3.0 capabilities. That’s because USB 3.0 is popular in meeting rooms these days for its ability to support video/camera and audio signals as more hybrid and digital meetings are being held since 2020. This makes this KVM switch perfect for a mid-sized, more full-fledged meeting room. 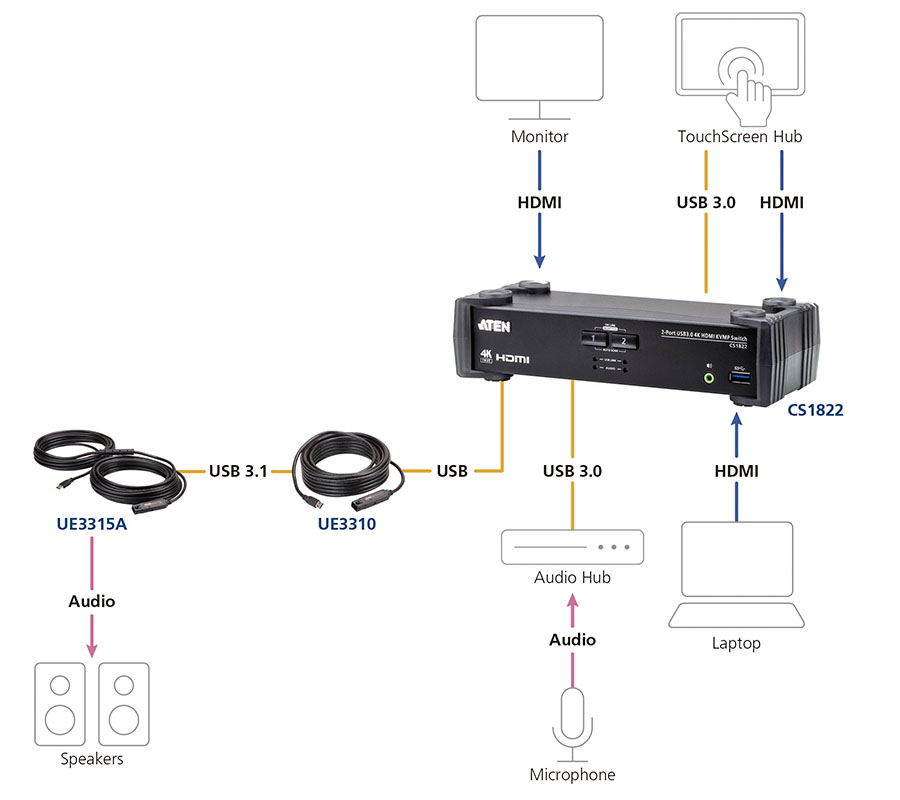 Small- and mid-sized rooms can feature a number of devices in use. In order to control them all, though, you’ll need a control system. Having one in place means that room devices can be managed via Serial, IO, or Ethernet.

A solution such as the ATEN Control System (VK0200 for the EU 2 Gang, VK0100 for the US 1 Gang) multi-button, customizable control pad is both ready-to-use and user friendly. It’s an Ethernet-based management system that connects to all hardware devices in a small- or mid-sized room, and even a classroom.

If you really want to take your meeting rooms to the next level, you’ll want to look into a presentation switch. Meeting room tech often requires combining various interfaces seamlessly and in a way that any user can easily learn.

A presentation switch, such as the VP1421, combines all of these different interfaces into one device. The VP1421 can distribute various signals over one HDBaseT cable. These signals include:

If you’re working with a large meeting room or conference room, you’ll likely need to extend video and audio signals over some distance too. A low-skew Cat5 Ethernet cable such as the 2L-2910 works with video and KVM extenders to transmit video and audio signals over long distances (each of these cables is 305 meters/1,000 feet). It does this without the bulk, high cost, or loss of image quality that most video cables suffer from, even traditional twisted pair Cat5e cables.

Another option for AV signal distribution is a fiber optic cable such as the VE7835, a True 4K HDMI Active Optical cable. While they only transmit video and audio, unlike HDBaseT extenders, optical cables such as the VE7835 are True 4K so they work better as extenders in this regard. In a large meeting space or auditorium, for example, they could be used to transmit signals from a video matrix to a video projector.

This type of cable also passes easily through cable canals, which means that it’s easy to install. In fact, this feature alone is sometimes the reason why some system integrators choose an optical cable such as the VE7835.

As many workers return to the office, meeting rooms will start buzzing with activity again. Using the above three scenarios, you can future proof your meeting rooms in relatively short order and in a way that’s both easy to use and allows for better collaboration.

ATEN specializes in flexible, easily deployed solutions for in-person and hybrid meeting spaces, including huddle spaces to meeting rooms, to future-proof organizational collaboration and meet the needs of the evolving workplace. These include:

Want to know more about ATEN meeting space solutions? Follow the links below:

Talk to Our Experts

If you prefer to have ATEN contact you, please complete the form and a representative will be in touch with you shortly 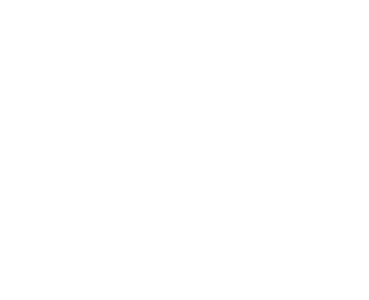